1. On 24 March 2017 we are going to celebrate the second anniversary of a real historic moment: the unveiling of the first ever London Haydn Blue Plaque dedicated to the great composer J. Haydn in 2015. The relation between Haydn and London is of such fundamental importance for the history of music, however, as strange it may sound, it has been really difficult to reach such an achievement. And thanks to your brilliant leadership, this tribute of London to Haydn and his music has been made finally possible. What can you tell us about the long path that led to the unveiling of Haydn Blue Plaque in 2015? What’s the story behind the Blue Plaque Campaign?

The Society began modestly enough when a few performers and fellow music-lovers got together to review the likely celebrations in the UK of the 250th anniversary in 1982 of the composer’s birth. Finding no obvious point of co-ordination, they decided to form a Society to assist the celebrations and «with the principal aim of promoting a wider knowledge and understanding of the music of Joseph Haydn and his contemporaries». The group initially included the Delme String Quartet, Denis McCaldin (the present Director), Stephen Plaistow (BBC Radio 3), the composer Robert Simpson, and Erik Smith (record producer).

To sustain interest in the coming celebrations, the Society organised a Haydn Festival of Chamber Music in the summer of 1980 at Wigmore Hall in London. From July 1st – 10th, ten concerts, consisting entirely of works by the composer were given on consecutive evenings by the Pro Arte and Delme String Quartets, the Esterhazy Baryton Trio and individual guest soloists. A subsequent review in The Strad by Tim Alps raised the wider question of Haydn’s commercial appeal that still applies today:


«If it were not for the dedicated and enterprising Haydn Society of Great Britain it seems unlikely that an event such as the Haydn Festival of Chamber Music, which monopolised the Wigmore Hall for the first ten days of July would ever get off the ground. For despite Haydn’s unassailable position amongst the most venerable greats the fact remains, and it was borne out by the attendance at the concerts I sampled, that at the box office Haydn cannot compete with Mozart or Beethoven.»

Among the Society’s early supporters were Reginald Barrett-Ayres, Antal Dorati, Karl Geiringer, Antony van Hoboken and H.C. Robbins Landon, all of whom served on the initial Committee of Honour.
In 1992 the Newsletter was upgraded to a Journal, and in this format that we have since published papers by a number of distinguished colleagues including Colin Lawson, Crispian Steele-Perkins, Emmanuel Hurwitz, Otto Biba and Richard Wigmore.

The bicentenary of Haydn’s death in 2009 prompted celebrations of his music world-wide.
In particular, the Society became more closely associated with the Haydn Festspiele Eisenstadt through the invitation of its director Dr. Walter Reicher. 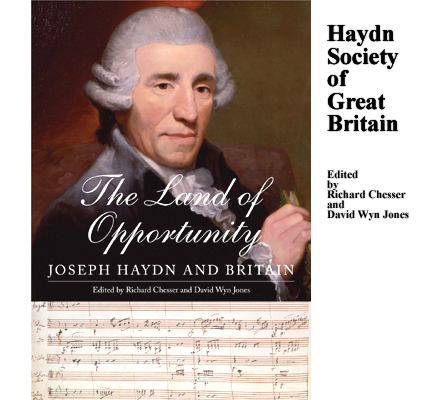 As well as concerts and conferences the Society has also released several recordings on Meridian and Divine Art.

The Society’s most recent initiative has been to campaign for a memorial plaque in London. As long ago as 2002, negotiations began with Westminster City Council to site a plaque in Bury Street, where the composer resided during his second visit to London in 1794-1795.

More recently exploration and negotiation in Soho has led to agreement for a plaque to be established at 18, Great Pulteney Street. The plaque was unveiled there as a memorial to Haydn by Sir Neville Marriner on 24th March 2015. A video record of the event can be seen on the Haydn Society website at www.haydnsocietyofgb.co.uk.

It is good that such a memorial should be in London, a city where Haydn was admired and loved, and where he himself spent some of his happiest years. 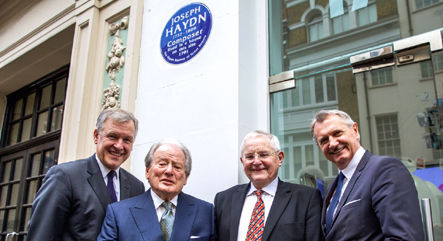 2. Many people supported your initiative and campaign for the London Haydn Blue Plaque and your work has been also supported by many friends and collaborators. Do you want to remember someone in particular and especially for the commitment to the Haydn Blue Plaque Campaign?

Rather as in Bach’s day, when musical skills were passed down through the generations, my daughter Clare and her partner Cheyney Kent contributed the most in terms of energy and commitment. (see McCaldin Arts.com and her project Haydn’s London Ladies).

3. Thanks to your activity as director, the Haydn Society of Great Britain has always promoted the diffusion of the music by Joseph Haydn, also through events and media (BBC Radio 3), since 1982, as you have previously indicated, and, recently, also through a constant web presence. And what about your future plans?

Amongst other projects, we have been invited to collaborate with King’s College, London University to design an innovative course for music students using IT to explore aspects of Haydn’s life in England.

4. As Haydn Society of Great Britain, you have also conducted an interesting survey among scholars, Haydn advocates and enthusiasts and people in general about the attractiveness of Haydn’s music and the possible reasons for its comparative neglect. What are the conclusions of your survey so far?

We have discovered that the accessibility of Haydn’s music can be deceptive.
In schools, the apparent simplicity of some of the music and the programmatic stories attached, as in the Clock, and Surprise symphonies, means that the music is often treated as an introduction to classical music, rather than on the same level as other great works of the period.
The idea of Papa Haydn dies hard, and once established in a child’s memory, there is tendency for thoughts about both the man and his music to be permanently associated with immaturity and pre-adult life.

5. After the death of her husband, Constanze Mozart somehow acted as the high priestess of the cult of Mozart and, in this way, preserved Mozart’s legacy and promoted his myth. Do you think that the difficult marriage and the famous terribilis wife of Haydn must have played some role in the partial neglect, into which most of his music production fell during the 19th and the 20th century?

This maybe the case, but the deification of Mozart as a tragic artist was a strong element, as was the influence of the Romantic movement in general.

6. And a particularly interesting fact, on that process of deification of Mozart that you were talking about, is that, after 1791, in his letters, even Haydn himself began calling Mozart our immortal Mozart, and always received Constanze Mozart among his closest friends. In 1790s Haydn even actually actively promoted the purchasing and the publication of Mozart’s manuscripts and unpublished works… So, in conclusion, Haydn himself accepted that particular treatment of Mozart, supported Constanze Mozart’s activity and was among Mozart promoters! Certainly an important token of their long friendship, from such a generous and constructive man as Haydn!
__________
You are also a conductor and you have also released a series of CD albums featuring Haydn’s music. As a conductor, what’s your personal approach to Haydn and to his music?

My main concern is to be loyal to the spirit of the music, and to project the essence of each movement in performances I direct.

This is often more difficult than it appears.

When we look at a Haydn score, the instrumentation can sometimes seem quite sparse, as though it lacks substance.

But any attempt on the part of the conductor to interpret the music, in an effort to compensate for this apparent deficiency, I find is generally counter-productive.

7. You have published also a series of important editions of Haydn’s sacred music, as an editor, through the Oxford University Press. Your Nelson Mass edition has been critically acclaimed. What have been your impressions and emotions, while directly working on the music by such a great Master of the History of Music. In your edition of Haydn’s Missa brevis Sancti Joannis de Deo you included also the elongated Gloria by his brother Michael Haydn. What do you think of the music by Joseph and Michael Haydn, when considered in comparison? What the differences?
Because I was able to work from the composer’s autograph score, the physical sight and contact with the Haydn’s handwriting – including his erasures and revisions – was very moving.
The hand-written manuscript was beautifully neat and clear.
__________
Like many music lovers, I’m not as familiar with Michael Haydn’s works as I would like to be.
However, those which I have heard, such as his Requiem in C minor, strike me to be as fine as those of his brother.

This is a very difficult question to answer. It’s often the work I’m studying at the time. If I had to choose, it would be The Creation.
__________
The Trumpet Concerto in E flat!

From lists of top choices in classical music that I have seen, the Trumpet Concerto by Haydn is always the first of Haydn’s works to be selected. 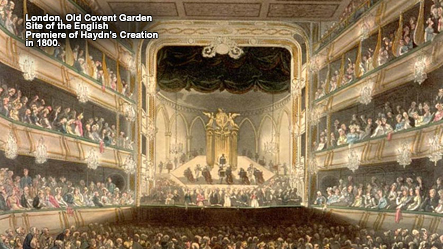 9. Beside Joseph and Michael Haydn, do you have in mind the name of some other neglected composer of the 18th century you’d like to see re-evaluated?

One is Wilhelm Herschel (1738-1822), a British contemporary of Haydn’s, a major astronomer, and a member of the Royal Society.

Another is the Italian Gaetano Brunetti (1744–1798), some of whose symphonies have been edited by Newell Jenkins.

10. Next 5-10 September 2017 you are organizing a wonderful journey to the places where Haydn worked, as lecturer with Martin Randall Travel. It will be possible to visit all the venues associated with Haydn, from Eisenstadt to Rohrau, Eszterháza and Vienna and to attend important concerts with internationally acclaimed orchestras and musicians, and in the very places, where Haydn himself worked, composed and performed his music. In your opinion, how important is to have a direct experience with the original places, to achieve a better comprehension of the music of such great composer.

Personally, I always like to visit the places where a composer lived and worked to explore their particular atmosphere and physical proportions.

In Haydn’s case, for example, the acoustics of the Haydnsaal in the Esterhazy Palace in Eisenstadt are unusually attractive, and this is rather surprising until it emerges that the composer insisted that the marble floor be covered in wood to achieve the acoustic he wanted for his orchestral concerts.

Finally, I would like to thank you for giving me the opportunity to contribute to your admirable publication.
I have enjoyed the chance to think about some of the reasons that I admire Haydn and his music.

Indeed, if I was offered one wish outside the present, it would be to spend an evening having dinner together.

Copyright © 2017 MozartCircle. All rights reserved.MozartCircle exclusive property.
Iconography is in public domain or in fair use.

Posted by mozartcircle at 1:52 AM

Posted by mozartcircle at 1:21 AM