Kerry Stratton: Official Links
Kerry Stratton & TCO Official Site: Toronto Concert Orchestra
Kerry Stratton: Wish Opera (Official Site)
Kerry Stratton (Radio Host): Classical Radio 96.3 Live
Kerry Stratton (Radio Host): Classical Radio 96.3 Host
Kerry Stratton: Kerry Stratton Twitter (Official)
Kerry Stratton: Kerry Stratton & TCO Facebook (Official)
Kerry Stratton: CD Liszt World Premiere De Profundis & Music After Schubert, Beethoven
Kerry Stratton: CD Mozart Clarinet Concerto & Weber Clarinet Concertino
1. For your recent series of concerts with the Toronto Concert Orchestra, you presented Haydn classics par excellence, featuring Haydn’s Concerto for Trumpet and the Symphony No. 88! What are the true elements of beauty and fascination in the music by Joseph Haydn, in your opinion?
Both Haydn and Dvorak have suffered scorn over the years simply for having the audacity to practice the art of music from a position of charming, robust mental health.
This to some, is an unforgivable failing but is the very thing that appeals to me in both composers.
Certainly, their respective publics needed no explanations of these composers’ appeal.
The beauty and fascination in Haydn is that he produced so much music of good quality and had so much to offer, yet stayed within the forms of his day while nevertheless contributing to them.
The fascination for me is the extent to which Haydn was a complete child of nature, who seemed to have written down whatever came into his head. Even in his sixties, he was writing to his publisher to request a book on counterpoint, feeling «It is time I studied».
The beauty and fascination… perfection of form and the flow of melody.

2. Genius & No Rules has been largely exaggerated! In reality both Haydn and Mozart, as you said, spent most of their lives studying and experimenting musical theories and even new ones. Also the famous dirty jokes of Mozart were not, in reality, in most cases, his own stuff, but he was just quoting then widely well known lines from Hanswurst’s popular theatre comedies, a sort of Austrian Mel Brooks of 18th century. The same consideration for Beethoven, who, moreover, had even always boasted his personal condition of intellectual superiority! And Beethoven’s Pastoral Symphony is still an important piece in your life as a conductor. What are your most profound considerations on this absolute masterpiece by Beethoven?
It was my good fortune to grow up on a farm, here in Ontario, that had been established in the 1850’s.
The buildings are gone now but they would have been the sort of edifice which nowadays would be preserved as a heritage site.
In any case, I was oblivious to that aspect and far more concerned with trying to amuse myself, cut off as one is in the country.
There is not a movement in Beethoven’s Symphony that fails to conjure images of my childhood: the arrival, by the brook (we had a great huge pond on the farm and a stream)… The merry making: (my mother came from a family of eleven children) and when all the families got together it helped Beethoven’s version of the peasants festival, make complete sense to me.
There are few things with the amniotic security of being in a century old stone farmhouse during a summer storm.
The Hymn of Thanksgiving means more to me at this stage in life as I look back on a childhood filtered through the gauze of memory. Beethoven knew what the country was all about and I recognized our commonality.
These considerations are not profound but I offer them to you from the point of view that no conductor without the experience of these things will ever give a convincing pastoral performance.

3. It is well known how Liszt, as child prodigy, was publicly presented by 19th century papers as the actual physical reincarnation of Wolfgang Amadeus Mozart, and how, last son of the Esterházy group, he cultivated an unconditioned devotion to Beethoven. In your famous Liszt CD with the World Premiere Recording of Liszt’s De Profundis, you conducted also two other masterpieces by him, the Wanderer Fantasia after Schubert and the Fantasy on Beethoven’s Ruins of Athens after Beethoven, which belonged to Liszt’s programme of public promotion of the music of the so called First Viennese School. Musically speaking, how do you think the spirit of the First Viennese School from Haydn to Beethoven-Schubert really emerges from the very music written by F. Liszt for piano and orchestra?
The inclusion of the Ruins of Athens and the Wanderer Fantasia were at my behest, the Schubert in particular because they represented an era and style that no longer appears in concert programmes.
What I have always sought in a piano soloist is not merely someone who knows how to play the score but who has researched how it was played.
The late Thomas Manshardt, last pupil of Cortot, was a dear friend and a convincing link to the great 19th century pianistic traditions.
Seldom did I encounter an artist who in Liszt, could use what he called the force of the anacrusis. Tom’s phrasing I cannot adequately describe but can only attest to power and the hold-your-breath kind of music making that he showed me.
Too often I feel that we are teaching students with what amounts to a powerful accent on the first beat of every bar which is a difficult habit to break or at least control.
This may be fine in some cases but Liszt appropriates Beethoven and Schubert for his own purposes and his own style, which was anything but rigid.

4. Beside your intense activity as a conductor, you have been carrying on various important projects both as Classical Radios Host with shows like Conductor’s Choice and The Oasis and as an avid promoter of the activity of young performers and conductors, especially during summer festivals. What have been the great challenges and the great accomplishments, you experienced with these special activities? We know also you are a renowned gourmet and now we are publishing many original 18th century recipes in the section of our Site The Mozartian Gourmet! What do you think of it?
I have enjoyed my work as a radio presenter in that the most important thing to convey to the listener is my love of the music. It may set the cat amongst the pigeons, but I am not out to educate.
Monet had a wonderful quote about his work: «Everyone discusses my art and pretends to understand, as if it were necessary to understand, when it is simply necessary to love».
We hear too often that people want to appreciate or respect music when it wasn’t written to be appreciated and respected. Those are merely by-products.
It is my view that Mozart to name but one, attests in his correspondence that he wanted people to love his music.
To come to this art form the listener needs but two things and they are time and desire. The rest will follow.
The challenges of the festival fall into the same category as all arts organizations can easily identify and that is securing funding, programming, promotion and consolidating for the future.
What it reduces to is that established arts groups are in one particular business above all others and that is the business of relationships. There are relationships amongst musicians, the conductor, the board, the sponsor and above all, the public. These partnerships are crucial to survival.
As for The Mozartian Gourmet, I would take the greatest interest in any recipe involving game! Now that’s my idea of a splendid meal of a winter’s evening.

5. Your Classical Music Radio Shows regularly broadcast Haydn, Mozart, Beethoven, Danzi, Viotti, Kuhlau and many other masters of 18th century and 19th century… is there a better form of education to beauty and good taste? And what about your favourite work by Mozart and your favourite work by J. Haydn?
Must we have favourites?
Paradise would be rehearsing and performing Mozart operas and Haydn symphonies for all eternity.
If, however, you need an answer, I am afraid I shall disappoint, as it is tantamount to asking which of my children is my favourite! 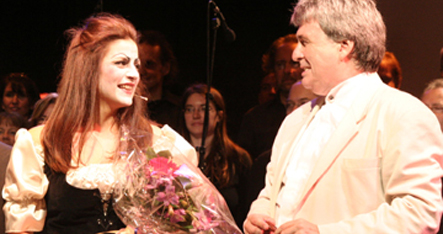 6. Do you have in mind the name of some neglected composer of the 18th century you’d like to see re-evaluated?
The Arriaga Symphony makes wish he had written thirty more but in a life so brief, we have what we have.
There have been some first rate recordings of F. X. Richter symphonies as well as Boccherini and Vorisek, which are a delight to me!
In general, I think the Bohemian symphonists are neglected.

7. You have already answered previously on the neglected pieces of music of the 18th century! So I’m asking you what is your vision on our approaching this so rich repertoire from 18th century?
To me it is more important to continue on the voyage of exploration and discovery than to focus on just one work!

8. Do you have in mind a particular book on Mozart Era you consider important for the comprehension of the music of this period?
To comprehend Mozart, but slightly, read his letters!
To comprehend the music, I think it is far more important to do score analysis.
This will teach much about the music and there is no substitute for this kind of work!
There are books aplenty and I have enjoyed many with the caution that when we encounter any writer who declares «I have the truth!» we must go in the opposite direction.

9. Name a movie or a documentary that can improve the comprehension of the music of this period.
I don’t believe such a film has been made but, as an enthusiastic amateur historian, I am always intrigued by military history of the time.
The movement of troops, ordinance and cavalry about a battlefield had the form, traditions and structure of any courtly dance.
Barry Lyndon is not a musical film but I am astounded by Thackeray’s portrayal of 18th century society in the original novel.
The film does well.
To know a people and aspects of their time, is no disadvantage in knowing their music.

10. Certainly both Kurosawa and Kubrick knew how to treat Classical Music in their movies! It is a fact that many people got acquainted with even rare masterpieces by Haydn, Schubert, Vivaldi and Ligeti through their movies. And the Soundtrack from Barry Lyndon did the same for Paisiello, one of the great musical models of Mozart and who spent also many evenings playing quartets with Mozart himself, and Handel!  Do you think there’s a special place to be visited that proved crucial to the evolution of the 18th century music?
In a word, Vienna!

Copyright © 2016 MozartCircle. All rights reserved.MozartCircle exclusive property.
Iconography is in public domain or in fair use.

Posted by mozartcircle at 4:17 AM

Posted by mozartcircle at 4:05 AM